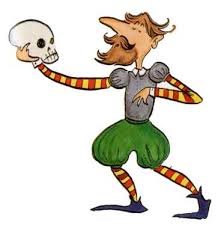 I’ve always liked and tried to weave in some elements of English and American culture and literature into my classes, as I believe that they are inextricably connected to the language. And recently I’ve been thrown into the deep end, as one of my advanced students told me that she would like to focus on literature in our classes.

I’d never taught a similar course, but I sprang at the idea with enthusiasm, since English and American literature is something I studied in university. On top of that, I’ve always been a voracious reader myself, and the perspective of finally teaching something completely different was also very appealing (not that I complain, teaching EFL in all its varieties is also great fun, but you know what I mean).

At the time my student was reading Hamlet anyway, so it was natural we started with Shakespeare (as if we needed an excuse for that). In an introductory class we read a brief biography (I will post the lesson here soon). Then it was time to tackle bits from Hamlet.

Obviously, watching the whole play was out of question. Discussing the whole play, with its myriad of motifs, characters, problems, etc. was also not on the cards. So I decided to focus on the “To be” soliloquy, which arguably is the best know part of the play, and which summarises and touches upon many things that happen before and after it, as well as providing a great springboard for discussion.

As a basis for the lesson  procedure, I took an old handout I’d been given by another teacher some years before.After publishing the post, it was pointed out to me that originally the handout was published on BC’s website by Paul Kaye from BC Syria in 2005. What I did was to expand and change his lesson by e.g. moving the focus to listening, and I hope this lesson is not seen as a copy of Paul’s, but rather as an extension and elaboration of his ideas with my own take on the theme.

As an aside, I think this lesson will also be suitable for general English classes (from strong Intermediate onwards), as I’ve done similar things on literature with individuals and groups many times with usually a very positive response from the students.

Read the quotations below. How do you understand them? What do they tell you about Hamlet’s mood?

Many bad things have happened to Hamlet.

a) Read the statements below and decide which of them are true, and which are false:

b) Discuss these questions:

You are going to listen to and watch Hamlet’s famous soliloquy: “To be, or not to be”. Knowing what you do about the position Hamlet’s in, what do you think he’s going to talk about? List one or two main ideas.

Listen and check whether your prediction was correct.

(NOTE: I chose Jacobi’s version available on youtube here, but that’s just my personal preference – a follow up idea would be to compare the 3 or 4 best versions of the speech, e.g. Olivier, Jacobi and Branagh)

Look at the ideas Hamlet expresses put into modern English. Can you arrange them in order? Listen again and check.

Now your teacher will give you the jumbled text of the soliloquy. Match it to the ideas from exercise 5. Then listen and read the text to put it in order.

(NOTE:you can either find it on google and cut it up to 6 chunks corresponding to the ideas a to f in the next exercise or email me, and I’ll send it to you – I have no idea how to attach documents here, unfortunately)

Hamlet mentions many problems, and the language might be difficult to understand. Look at the below quotations. How do you understand them? Can you put them into modern English? Use the context and the full text to help yourself.

(NOTE: stress that students shouldn’t translate word for word, but rather use the larger context of the soliloquy, as well as the ideas discussed previously)

a) The pangs of despised love
b) The law’s delay.
c) The whips and scorn of time
d) The insolence of office
e) The proud man’s contumely
f) The spurns that patient merit of the unworthy takes

Now try to give a modern example of the problems that Hamlet has. Below are some suggestions:

At home write a response to Hamlet’s dilemma, giving examples from present times. Among other things think: 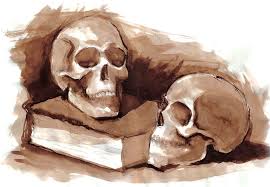